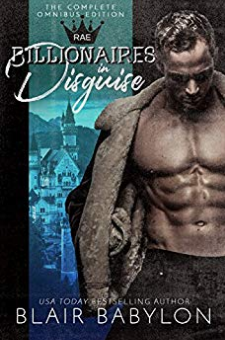 Everyone tells you that a reckless quickie at a party will ruin your life, but that’s sure not what happened.I’m just a small-town girl, and I messed up and lost my scholarship. I was broke. I couldn’t afford college. They were kicking me out.But then I met tall, ripped, tantalizing Wulf, whose sapphire-blue eyes that warmed when I was joking around while we waltzed, and I did something that anyone would tell you is stupid.I knew he was rich. I knew he was into some wild stuff. But he was more than I thought. So much more.And that was the problem.I fell in love with him that night, the night he saved me, and then I was the one who was screwed.This Complete Boxed Set of Billionaires in Disguise: Rae contains all nine original episodes.