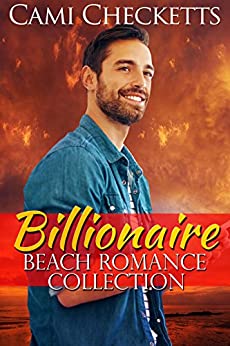 Seven complete clean billionaire romance novels all set in fun and exotic beach locations.
Caribbean Rescue:
Zack Tyndale was destined to win gold in the 2012 Olympics, but he tripped and shattered his own dreams. Running from his controlling father and the sympathy in everyone’s eyes, he buys an island in the Caribbean where he can live blissfully alone.
Madeline Panetto’s graduation present is a trip sailing around the Caribbean on her father’s yacht. Unfortunately, her father is a pirate, and when there is an uprising on his ship, she escapes and crash-lands on Zack’s island.
Cozumel Escape:
Brooks Hoffman, billionaire, loves women, expensive toys and fighting—in that order. A week romancing a beautiful woman on his private island near Cozumel is a great way to pass the time. When Sydnee Lee Swenson isn’t impressed with his money, or charmed by his…well, charm, Brooks takes it as a personal challenge to change her mind.
Cancun Getaway:
Moriah Jackson arrives in Cancun expecting a relaxed beach vacation with her son. She doesn't plan on meeting a charming, blond Adonis who’s intent on sweeping her off her feet. And she certainly doesn’t expect to be targeted by human traffickers. Fighting the urge to be drawn in by Jace's kindness, Moriah must let go of her past or she'll jeopardize more than just her own future.
Trusting the Billionaire:
Athena sets out to teach Nixon about the city and its history while ignoring his inherent kindness, sharp intellect, and the warmth that spreads through her body when he touches her. Nixon is determined to help her mom battle MS no matter what Athena thinks of his vitamins.
How to Kiss a Billionaire:
Sassy meets swoon-worthy in this fast-paced contemporary romance.
Miriam Salisbury escapes to Oregon to avoid a boyfriend who won’t take no for an answer, killing her beloved cat to prove it. When her father sends Clay Browning to protect her, she’s certain he’s lost his mind. As far as she’s concerned Clay’s experience is limited to posing for the camera, charming women, and making fun of her. He’s been teasing her since they were children and she’s never gotten over the way he threw crawdads at her at church picnics.
Onboard for Love:
Alicia Noir's ex-husband, Trav, has always valued his race car more than his family, just like her dad who died in his race car. When their eight-year old son pulls them into the cruise vacation of a lifetime, she has to find a way to resist Trav's charm, his well-formed chest, and especially his unending kindness. Will vacation reignite their love or is their romance destined to crash and burn for the final time?
Shadows in the Curtain:
Emmy has the perfect life— a house on the beach, a successful career headlining the local theater, and love. But when a brutal murder brings unimaginable grief, Emmy’s world comes crashing down. As she tries to pick up the pieces, she can’t seem to avoid Josh, the new fireman in town.
Emmy does her best to fight the sizzle in her chest when Josh is near. But with the stalker still out there, terrorizing her and those she cares about, she can’t fall for anyone—especially Josh, a suspect in the murder investigation.
If Emmy allows a man to get close, it’s not just her heart she puts at risk, it’s her life.
Don't miss Cami's latest clean romance series: Survive the Romance:
#1 – Romancing the Treasure
#2 – Romancing the Escape
#3 – Romancing the Boat
#4 – Romancing the Mountain
#5 – Romancing the Castle
#6 – Romancing the Extreme Adventure
#7 – Romancing the Island
#8 – Romancing the River