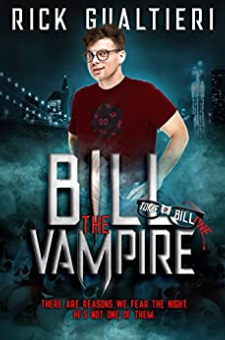 There are reasons we fear the night. He’s NOT one of them.Bill Ryder was a dateless geek, but then he met a girl to die for. So he did. Sadly, that was just the beginning of his troubles. He awoke as a vampire but, fangs or not, he was still at the bottom of the food chain.Now he finds himself surrounded by creatures stronger, deadlier, and a hell of a lot cooler than he is ... and they all want to kick his ass.Bill isn't exactly average, though. A vamp like him hasn't been seen in centuries. He's got a few tricks up his sleeve, unexpected allies, and an attitude that makes him too damned obnoxious to quit.Join him in this hilarious tale of bloodthirsty monsters and the unlikely hero who's not afraid to flip them all off, even if it gets him killed - again.----------Bill The Vampire is book one in the bestselling Tome of Bill horror comedy series - a hilarious misadventure through a world of supernatural horrors. If you're a fan of Shayne Silvers, Steve McHugh, Orlando A. Sanchez, K.F. Breene, or Jim Butcher, then you're in for a bloody good time with this vampire comedy. Click BUY NOW to start enjoying the snark right away.The complete Tome of Bill series order:Bill the Vampire (book 1)Scary Dead Things (book 2)The Mourning Woods (book 3)Holier Than Thou (book 4)Sunset Strip (series adventure)Goddamned Freaky Monsters (book 5)Half A Prayer (book 6)The Wicked Dead (book 7)Shining Fury (series adventure)The Last Coven (book 8)Also be sure to check out BILL OF THE DEAD:Strange Days (book 1)Everyday Horrors (book 2)