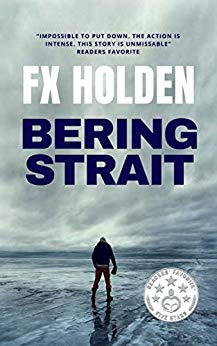 "Impossible to put down. The action is intense and the plot unique. It soars along at a fast pace. This story is unmissable." - 5 Star Review from Anne-Marie Reynolds for Readers’ Favorite."Realistic and original. A fast-paced thriller packed with action and suspense."- Publishers Weekly BookLife Without warning, Russia starts a lightning operation to seize control of a vital arctic waterway off the Alaska coast.For America, it's a threat to national sovereignty. For Russia, it's a matter of life or death.For hot-wired naval aviator, Karen 'Bunny' O'Hare, it's about to be a bad day at the office.NOT everyone takes impending nuclear armageddon as calmly as O'Hare. Dug in deep behind enemy lines, half a mile under the arctic ice, US Navy Airboss Alicia Rodriguez suddenly finds herself in command of the wrong unit, in the wrong place, at just the right time. FROM a forward airfield at Lavrentiya in the Russian Far East, Major-General Yevgeny Bondarev, is leading a war he doesn't understand against a foe who fights with machines instead of men. IN labyrinthine tunnels under the New Annexe of the US Embassy in Moscow, Ambassador Devlin McCarthy discovers she can follow her conscience, or follow the orders of her Secretary of State, but not both.AND staggering through the rubble of cruise missile strikes on Saint Lawrence Island, Yu'pik teenager Perri Tungyan learns just how far his country is willing to go to protect its national interests, and how far he'll go himself.