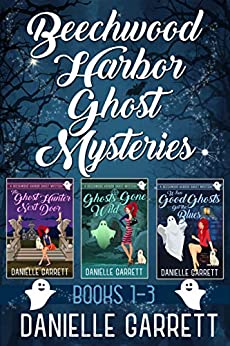 Welcome to Beechwood Harbor. A rustic, coastal town where paranormals live among humans, undetected — at least, so far.

Scarlet Sanderson isn’t a paranormal being per se, but she’s no stranger to things that go bump in the night. She’s had the ability to see and speak with ghosts since she was eight years old. Whether it’s a gift or a curse is still up for debate.

She moved to the picturesque town of Beechwood Harbor to open a flower shop and start a new life after years of being a nomad. What she didn’t expect to find was a town filled with witches, vampires, shape-shifters and ghosts. So, so many ghosts.

With her sarcastic ghost cat and a stately 20th-century gentleman by her side, she can take on the world. She just wishes that world would stop landing her in the middle of murder investigations. Cold case murders, reckless poltergeists, and depressed specters are becoming Scarlet’s new normal. But how in the Otherworld is she supposed to have any kind of real life when she’s stuck halfway between the world of the living and the dead?

This boxed set includes the first three books in the series, The Ghost Hunter Next Door, Ghosts Gone Wild, and When Good Ghosts Get the Blues.