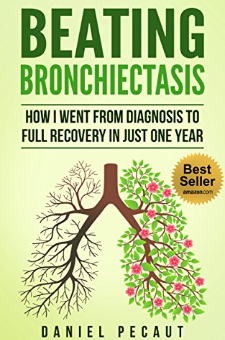 Beating Bronchiectasis is one man's personal story of overcoming hopelessness in the face of rapidly-deteriorating health and being written off by the best doctors. Forced to take full responsibility for his own recovery, he researches and creates his own demanding plan to get back what he lost. The only question is: Will it work?During one particularly bad winter, Daniel's health started deteriorating rapidly in a downward spiral that lasted months. This free fall lasted until a life-altering appointment at the Mayo Clinic gave him the diagnosis: Bronchiectasis.But their only advice for him going forward was, "Don't get sick."Realizing his doctors had written him off, Daniel went into denial. His situation was dire--he was dying. But if he wanted to live, he had to take control of his health. Daniel built a healing dream team, including a medical concierge, and started moving slowly but surely on the journey to optimum health.As his story progresses, Daniel describes in great detail the tips and treatments he learns along the way. He describes how he found them, how he used them and what each of them did for him. The combined results of which were life-changing.After 18 months of following his regime every day, he regained his vitality and energy. Instead of waking up exhausted after sleeping for 14 hours, he now felt rested after eight. Instead of getting winded while walking, he could comfortably run a 10K (6.2 miles) in an hour. He increased his lung capacity and cleared out the mucus in his lungs and sinuses. In the end, he was finally able to breathe deeply and easily once again.His resounding victory is proof that you don't have to lie down and suffer in the face of debilitating illness.