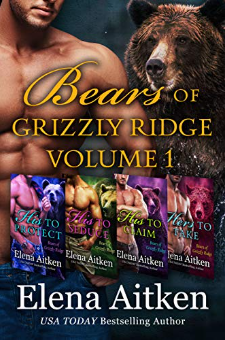 The only thing sexier than an alpha male mountain man who knows what he wants, is FOUR of them! Meet the sexy alpha Jackson brothers (and their sassy, strong little sister) in the Bears of Grizzly Ridge Series: Volume 1 His to ProtectFrom the moment he lays eyes on her, Axel Jackson knows Harper Bentley is more than just a guest at his lodge. Much more. Every bear shifter has a mate. She’s his. And whether his brothers believe in fated mates or not, nothing will keep Axel from what is his. But first he’ll need to convince Harper that what she’s feeling is more than lust. It’s fate. His to SeduceChloe Karrington has spent her life running from the idea of needing a man, let alone a mate. After all, she’s an independent career woman, a man would only get in the way. Besides, she’s never met anyone who was worth the time. That is until she meets way too sexy, way too intense, Luke JacksonHis to ClaimThe last thing Kade Jackson wants in his life is a woman. Particularly one who clouds his instincts and challenges everything he’s come to believe about love and mates. But Ella Santos is no ordinary woman, and she just might be worth opening up to. But before he can let himself commit, Kade must come to terms with his past, and the secrets that altered everyone’s lives foreverHers to TakeBecause of one bad decision—a no good, lying, son-of-a-bitch of a man—Kira Jackson became estranged from her tight knit family. She would do anything to rebuild the relationship with her bear clan instead of the life she is currently living. Alone. So when she meets the sexy shifter, Nash North, it doesn’t matter how hot he makes her blood boil. She’s not about to make the same mistake twice.**Reader note: Each book in the Bears of Grizzly Ridge is a standalone story with a guaranteed HEA and No Cliffhangers! This series contains: strong, sassy, curvy women; sexy alpha males; steamy shifters and sizzling sex scenes.