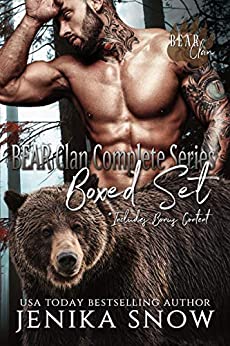 That first time I saw her—my mate—I’d been ready to kick some guy’s ass for even looking at her. I made no apologies for my possessive, territorial side. I was a grizzly bear shifter, after all. It was my nature to be over the top.

-BEARly Mated to the Grizzly (Book 2)

I decided to get away from it all, go out in the middle of nowhere to clear my head, and focus on what was important. Things were going great until a bear was at my back door, trying to get in. And it ended with me wielding a knife for protection and realizing it wasn’t just any bear, but a shifter who claimed to be my mate.

I didn’t know her, what she looked like, where she was, but I knew my mate was out there. And it was that truth that had me saving myself for her. Only her. If I couldn’t fully give myself over to my fated mate, what kind of worthy male was I?

But staying in town, hidden deep within the forest, wouldn’t bring my mate to me. I had to go and find her.

I had to make her mine.

When Asher showed up on my doorstep during a storm, soaking wet, looking feral, telling me he’d tried to stay away but couldn’t, I knew one thing for certain. These weren’t just idle feelings I was having.

This was what it felt like to be mated.

I devoted my life to working, building a career and business, making sure I was secure and stable in my life for the sole purpose that I’d find her, that everything would be ready and perfect for her.

-A BEARy Happily Ever After (Book 6)

An alpha, bear-shifting virgin who was saving himself for his mate.

That’s what I was. And I was fine with that, because saving myself for the one female who was meant to be mine was the only thing I ever wanted.  A lone bear without a mate was a depressing thing. And even though I knew she was out there—the other half to my soul—I was beginning to think there was no happily ever after for me.

Until I saw another male lusting after her. There was no way I could control myself. She was mine, and if that meant kicking the ass of the man who wanted her… then so be it.

Rue would be mine.