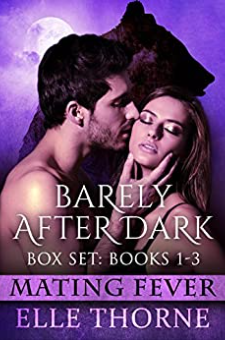 More of Mae Forester’s nephews! Grizzly bear shifters steam up the pages in these swoon-worthy paranormal romances. From trespassers with hidden agendas to curvaceous women who are ready to take a chance, the stories in this collection will capture your heart.Cross Cross del Cruz is a former Compliance Enforcer with the Shifter Council. He did his duty. He enforced the Council’s will around the country and even out of the country. Stress the word former, because all he wants now is to be left alone. He’s been living in his cabin on Bear Canyon Mountain Range, overlooking Bear Canyon Valley and enjoying the solitude of the forest. The quiet. The simplicity. The drama free environment that doesn’t involve other shifters. Not even family. Except now Mae Forester, who has dubbed him as one of her “nephews” has decided she needs his help. He can’t turn Mae down, not when she gave him and his brothers a home during the worst days of their lives. He didn’t expect Ariadne Fueller. Who could ever expect that curvy spitfire. She flipped his world upside down. Before meeting her, Cross never would have called his existence lonely—until he met her. LanceLance del Cruz has just finished his tour with the Shifter Council Compliance Unit. Being an Enforcer wasn’t difficult, it was too easy, actually. He’s had his share of hunting rovers and doling out justice for the Shifter Council. He’s going home to the cabin he’s only managed to visit in short spurts for the last four years while he served the Council. He’s making one stop on the way to the cabin, to say hi to Mae, the one who gave Cross and his brothers a home during their younger, darker days. Except Mae has a favor to ask him. And there’s this other little complication… A luscious, curvy thing called Mac—short for MacKenzie. Damned if he can resist her.JudgeJudge del Cruz followed in his older brothers’ footsteps, serving in the Shifter Compliance Unit. He never thought much about returning to the mountain range where he spent so much of his teen years. Those were the happiest days of his life, but being an Enforcer allows him to stay too busy to dwell on any of his past. But the call to return to Bear Canyon Mountain Range is too powerful. So he packs up, ready to see his own cabin at the top of the range. What he didn’t plan on, seeing, the curvy bootilicious Alanna who pushes his buttons, in all the wrong ways—and yet by damn, in all the right ones too!