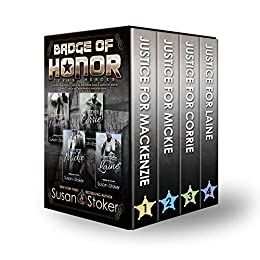 Books 1-4 in the Badge of Honor: Texas Heroes Series

Justice for Mackenzie
She blinked, hoping she’d be able to see something…anything, but she remained as blind as when she woke up. She whimpered, knowing she was in big trouble.A member of the famed Texas Rangers, Daxton Chambers has dealt with more than his share of depravity. But the Lone Star Reaper takes evil to a whole new level, kidnapping and burying women alive. It's Dax's job to help keep San Antonio safe, but even with help from friends in various law enforcement agencies, the killer remains two steps ahead. It's hardly the ideal time for a relationship, but Mackenzie Morgan is too luscious to resist. Dax wants her--which makes her an instant target for his newfound enemy.

When the Reaper gets personal, it will take every ounce of Daxton's considerable skill and training to keep Mack alive.

Justice for Mickie
It wasn’t about keeping her safe from the motorcycle club anymore, although that was still a concern—it was about a man spending time with a woman who he was interested in.For Cruz Livingston, becoming an FBI agent is a lifelong dream, guarding the streets of San Antonio a calling. His latest assignment—infiltrating the Red Brothers Motorcycle Club—will help stem the flow of illegal drugs brought into the city by the violent gang. He expects the job to be dangerous. He doesn’t expect to meet the woman of his dreams while undercover.

Mickie Kaiser is refreshingly sweet, but her sister is intimately involved with the RBMC’s president. Cruz can’t afford to come clean about his double life without putting his operation in danger, but as violence creeps ever closer to Mickie, his priority becomes crystal clear. Cruz will do anything to keep Mickie alive…even if it means losing her love.

Justice for Corrie
As proud as she was of getting this far on her own, a little help right now would be very appreciated.Blind since birth, Corrie Madison relies on her other sharpened senses in her job as a chiropractor. Never did she imagine she’d have to depend on them to identify a killer. But when a man enters her practice, murdering everyone in his path, Corrie is the only witness—putting her directly in the killer’s crosshairs.

Officer Quint Axton wasn’t looking for love, or even a relationship, until he meets Corrie. Beautiful and brave, resilient and intelligent, she’s everything Quint wants—if he can keep her alive long enough to explore their mutual attraction. The threats on Corrie’s life are escalating. Surely a blind person is helpless against a ruthless killer?Hardly. Corrie is about to prove that disabled does not equal defenseless. Read more