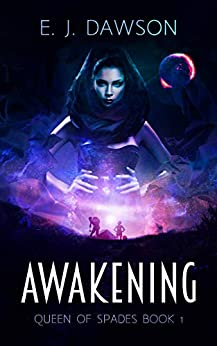 Ayla is a villain. With a gift that allows her to see when anyone will die, she’s remorseless in her profession as the perfect assassin. When she wakes up in a cryo-tank three thousand years in the future, and no idea how she came to be there, all that matters is survival.Rescued by Leith and the crew of the Nuria, Ayla discovers a far evolved world of space ships and galactic colonization. But everything comes with a price, and though Ayla is no princess locked in an icy tower, she still has to pay for the rescue she didn’t know she needed.Given over to Leith, a darkly handsome man who reads Ayla far easier than she’d like, they must work together if Ayla is to repay her debt. As the pair come to learn how dangerous one another are, so too grows a lustful bond that comes with rules of its own. Fighting to learn why she was frozen, Ayla’s dragged into Leith’s past with a criminal organization seeking to take over this sector of the galaxy. In order to survive, Leith will need Ayla’s help, but Ayla doesn’t know if she’s willing to pay what it will cost her…