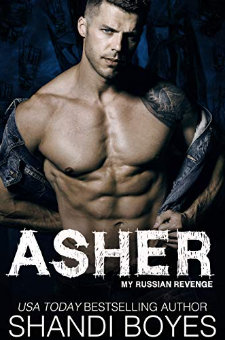 Our families were friends long before they became bitter rivals, but as the decade long hatred grew, so did the bloodshed. Things are different now, though; my father is a changed man. He’s had enough of the violence and wants to spend his final years in peace. In the midst of an epiphany, he gifted me to an enemy. I am to do anything to make him happy, to reforge the tight union our families once had, and to ensure it will be impossible to break. There’s just one issue... he gave my hand in marriage to a man hell-bent on seeking revenge, and my name is at the top of his hit list.I am Zariah Volkov, and my husband-to-be wants to kill me. Asher: My Russian Revenge is book five in the Russian Mob Chronicles Series, but can be read as a standalone. It also has no cliffhangers!