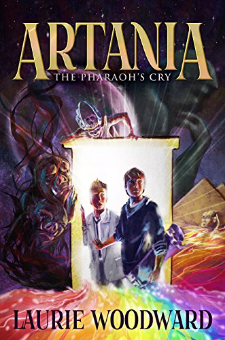 Imagine a world where all art is alive. A mystical land where every sketch, painting, and sculpture breathes and loves just like you and me. If it were in danger what would you do to protect it?
That’s the question the lonely Bartholomew Borax III asks himself when he is yanked into Artania, the land of living art. Just when he thinks his boring life will always suck, he and skateboarding painter, Alexander Devinci, discover that they are the prophesied artists destined to keep this land safe.
Artania has many realms: Renaissance Nation, Impressionist Republic, and Gothia all are populated with the art of their time. But below ground lives an evil race of creatures whose sole purpose is to destroy, attacking from their underground lair of Subterranea. These Shadow Swine have captured twelve pharaohs and if they are not rescued before the sands of time run out, The Land of Antiquities will turn to dust.
But only the prophesied Deliverers can stop them.
No way.
When he sees a struggling Artanian child pulled underground, Bartholomew finally agrees to help, not knowing if it will be enough. With Egyptian gods, goddesses, and warriors at their side, they brave a series of battles, duels, and skateboarding escapes. Bartholomew blunders again and again. Amidst dead and wounded comrades, his guilt grows. As his confidence begins to erode, he must use all of his talents to create the true art. For only its power can defeat Sickhert’s army and bring art back to the world.