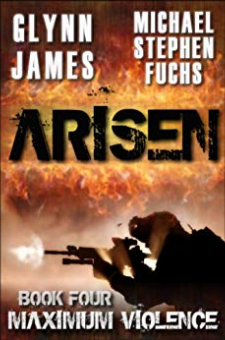 Readers can't stop raving about ARISEN:"heart-stopping" ... "Knock Down Drag Out FANTASTIC!!!!!!" ... "left me with my mouth hanging open" ... "scary good" ... "the most original and well-written zombie novels I have ever read" ... "riveting as hell - I cannot recommend this series enough" ... "gets better and better with each book" ... "kick-ass crazy" ... "harrowing, riveting, and authentic" ... "Wow. Just wow." ... "Fantastic thrill ride into chaos!!! Just amps up the action" ... "one badass unstoppable bullet train ride"Over a half-million ARISEN books sold and still climbing...Arisen, Book Four -MAXIMUM VIOLENCEIn Canterbury, as the virus rages out of control, one troop of Royal Marine Commandos fights a 360-degree battle for survival, while also racing to rescue the Channel Tunnel survivors from a relentless siege - all before Hellfire missile strikes and carpet bombing kill anyone left alive. Across the Atlantic, the crew of the USS John F. Kennedy risks a catastrophic reactor meltdown to get out of the path of a ten-mile-wide tide of the dead; while, onshore at the Naval Air Base, Wesley's tiny team maintains a lonely vigil - which turns horrifyingly dangerous as the edge of the storm hits, pushing desperate civilians ahead of it. In the air above, Master Gunnery Sergeant Fick leads a hand-picked fire-team of spec-ops Marines halfway across North America to take and defend an airfield on a remote island - but learns to his cost that it is a place with a terrible history, and very dangerous secrets. Finally, out on Lake Michigan, Alpha team races toward extraction... but first must fight their most harrowing battle yet - this time against the living, who are both more treacherous and a hell of a lot better armed than the dead.Who will be left standing at the end? Find out - if your heart can take the strain - in the biggest and most explosive ARISEN book yet:ARISEN, BOOK FOUR - MAXIMUM VIOLENCE.