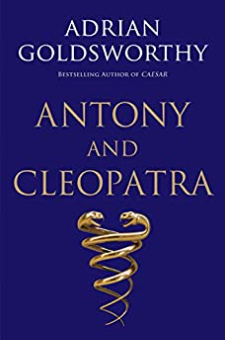 The acclaimed historian reveals the truth behind the myths of antiquity’s legendary lovers in “this thoughtful, deeply satisfying” dual biography (Publishers Weekly, starred review).   In Antony and Cleopatra, preeminent historian Adrian Goldsworthy goes beyond the romantic narratives of Shakespeare and Hollywood to create a nuanced and historically acute portrayal of his subjects. Set against the political backdrop of their time, he presents two lives lived at the center of profound social change. It is a narrative that crosses cultures and boundaries from ancient Greece and ancient Egypt to the Roman Empire. Drawing on his prodigious knowledge of the ancient world, and especially the period’s military and political history, Goldsworthy creates a singular portrait of two iconic lovers who were, in his words, “first and foremost political animals.” With a close analysis of ancient sources and archaeological evidence, Goldsworthy explains why Cleopatra was often portrayed as an Egyptian, even though she was Greek, and argues that Antony had far less military experience than popular legend suggests. At the same time, Goldsworthy makes a persuasive case that Antony was a powerful Roman senator and political force in his own right. A story of love, politics, and ambition, Goldsworthy’s Antony and Cleopatra delivers a compelling reassessment of a major episode in ancient history.