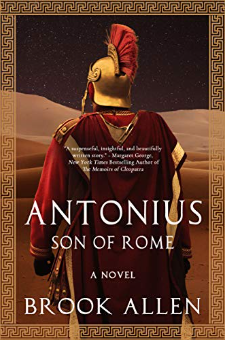 "A SUSPENSEFUL, INSIGHTFUL, AND BEAUTIFULLY WRITTEN STORY" Margaret George, New York Times Bestselling Author of The Memoirs of CleopatraINDIE B.R.A.G. MEDALLION AWARD FOR EXCELLENCE RECIPIENTWINNER of the Coffee Pot Book Club BOOK OF THE YEAR AWARD, 2019Silver Medal recipient in the Reader's Favorite Book Reviewers Awards, 2020"...A THOROUGHLY ENGAGING STORY...HARD TO PUT DOWN." Griff Hosker, Author of LORD EDWARD'S ARCHERReview: Reviewed by Maria Victoria Beltran for Readers' Favorite~Brook Allen's Antonius: Son of Rome is about the life of young Marcus Antonius after his father dies in disgrace in Rome. The Roman Republic is waning and the young man yearns to restore his family’s honor. Handsome and possessed of military talent, he's now entering manhood and falls prey to the excesses of a licentious Roman society. After an episode of whoring, gambling, and drinking, he ?nds himself mired in debt and grieving the death of his wife and unborn child. The political situation is dangerous while personal and political tragedy haunts his family. With help from a relative, the rising politician Julius Caesar, he ?nally earns a military commission, where he struggles to earn the respect and admiration of the soldiers, proconsuls, and kings that he deals with on his way to his destiny. Antonius: Son of Rome by Brook Allen is the ?rst installment in a trilogy about the life of Marcus Antonius. More popularly known as Marc Anthony, a lot of books have been written about him but none is probably more introspective than Brook Allen's compelling trilogy. One of history's most controversial ?gures, Marc Anthony's life seems like an open book, but it is largely based on accounts written by his enemies. Allen's book, however, is an objective and microscopic look at the early life of Rome's iconic symbol of love and power. Antonius: Son of Rome is a revealing story of the young Marc Anthony. Growing up in the shadow of a disgraced father, this noble son of Rome has a very uncertain teenage life but he will go on to become a very promising soldier and this is just the beginning of his remarkable life story. Kudos to Brook Allen for introducing us to the real person behind the enigma that is Marcus Antonius.After young Marcus Antonius’s father dies in disgrace, he yearns to restore his family’s honor during the final days of Rome’s dying Republic. Marcus is rugged, handsome, and owns abundant military talent, but upon entering manhood, he falls prey to the excesses of a violent society. His whoring, gambling, and drinking eventually reap dire consequences. Through a series of personal tragedies, Marcus must come into his own through blood, blades, and death. Once he finally earns a military commission, he faces an uphill battle to earn the respect and admiration of soldiers, proconsuls, and kings. Desperate to redeem his name and carve a legacy for himself, he refuses to let warring rebels, scheming politicians, or even an alluring young Egyptian princess stand in his way.