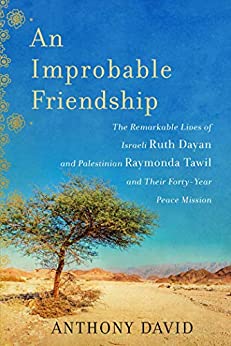 An Improbable Friendship is the dual biography of Israeli Ruth Dayan, now ninety-eight, who was Moshe Dayan’s wife for thirty-seven years, and Palestinian journalist Raymonda Tawil, Yasser Arafat’s mother-in-law, now seventy-four. It reveals for the first time the two women’s surprising and secret forty-year friendship and delivers the story of their extraordinary and turbulent lives growing up in a war-torn country.

Based on personal interviews, diaries, and journals drawn from both women—Ruth lives today in Tel Aviv, Raymonda in Malta—author Anthony David delivers a fast-paced, fascinating narrative that is a beautiful story of reconciliation and hope in a climate of endless conflict. By experiencing their stories and following their budding relationship, which began after the Six-Day War in 1967, we learn the behind-the-scenes, undisclosed history of the Middle East’s most influential leaders from two prominent women on either side of the ongoing conflict.

An award-winning biographer and historian, Anthony David brings us the story of unexpected friendship while he discovers the true pasts of two outstanding women. Their story gives voice to Israelis and Palestinians caught in the Middle East conflict and holds a persistent faith in a future of peace.

Skyhorse Publishing, along with our Arcade, Good Books, Sports Publishing, and Yucca imprints, is proud to publish a broad range of biographies, autobiographies, and memoirs. Our list includes biographies on well-known historical figures like Benjamin Franklin, Nelson Mandela, and Alexander Graham Bell, as well as villains from history, such as Heinrich Himmler, John Wayne Gacy, and O. J. Simpson. We have also published survivor stories of World War II, memoirs about overcoming adversity, first-hand tales of adventure, and much more. While not every title we publish becomes a New York Times bestseller or a national bestseller, we are committed to books on subjects that are sometimes overlooked and to authors whose work might not otherwise find a home.