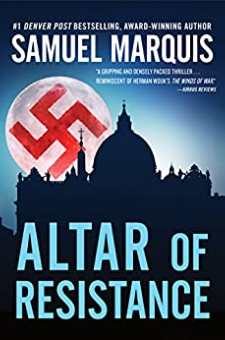 Award-Winning Finalist Foreword Reviews' Book of the Year Awards Award-Winning Finalist American Book Fest Best Book Awards Award-Winning Finalist Beverly Hills Book Awards The gripping story of the Italian Campaign and Nazi Occupation of Rome in 1943-1944 through the eyes of the Allies, the German Occupiers, Pope Pius XII and the Vatican, and the Roman Resistance. In this second historical fiction novel in the bestselling WWII Series, the Eternal City of Rome is a besieged city. In this perilous wartime setting, Rome is a tinderbox of four conflicting parties: the Allied liberators; the brutal German occupiers; the Vatican and Pope Pius XII, deeply involved in the plot to remove Hitler from power while struggling to save Rome from destruction; and the resolute Partisans. Based on actual historical events and newly released OSS/CIA and KGB documents, Altar of Resistance recounts in detail the long, hard road that led to the Allied liberation of Rome