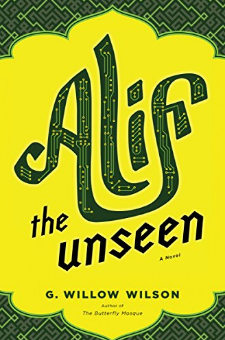 “[A] Harry Potter-ish action-adventure romance” set during the Arab Spring, from the New York Times–bestselling author of the Ms. Marvel comic book series (The New York Times).   In an unnamed Middle Eastern security state, a young Arab-Indian hacker, who goes by Alif, shields his clients—dissidents, outlaws, revolutionaries, and other watched groups—from surveillance, and tries to stay out of trouble.   The aristocratic woman Alif loves has jilted him for a prince chosen by her parents, and his computer has just been breached by the state’s electronic security force, putting his clients and himself on the line. Then it turns out his lover’s new fiancé is the “Hand of God,” as they call the head of state security, and his henchmen come after Alif, driving him underground.   When Alif discovers The Thousand and One Days, the secret book of the jinn, which both he and the Hand suspect may unleash a new level of information technology, the stakes are raised and Alif must struggle for life or death, aided by forces seen and unseen.   This “tale of literary enchantment, political change, and religious mystery” was a New York Times Notable Book and winner of the World Fantasy Award for Best Novel (Gregory Maguire).   “Wilson has a deft hand with myth and with magic.” —Neil Gaiman, author of American Gods