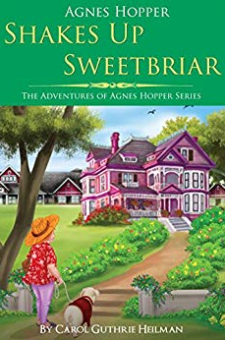 Nominated as a Pat Conroy Southern Beach Music MysterySummer's steamy haze coats North Carolina's Blue Ridge Mountains, but feisty Agnes Marie Hopper discovers the heat isn't the only thing causing her blood to boil. After a kitchen fire destroys her home, Agnes moves in with her daughter, Betty Jo. Three months later they come to an understanding: neither can tolerate living with the other. So on a sultry August morning, Betty Jo drives Agnes and her few belongings to Sweetbrier Manor, a local retirement home and former house of ill repute.With no intention of staying, Agnes devises a scheme to sneak out of the Manor and find another place to live. Before she can make her exit, though, she runs into her best friend from high school, along with some other quirky characters. With a nose for trouble, Agnes learns some of the residents are being robbed, over-medicated, and denied basic cable and Internet access. Armed with nothing more than seventy-one years of common sense and a knack for pushing people's buttons, Agnes sets out to expose the unscrupulous administrator, protect her new friends, and restore Sweetbriar Manor's reputation as a "rewarding and enriching lifestyle." But the real moment of truth comes when Agnes is forced to choose between her feisty self-reliance and the self-sacrifice that comes with caring for others.Written for the General Market (G) (I): Contains little or no; sexual dialogue or situations or strong language. May also contain content of an inspirational nature. Amazon customers who purchase the print version have the option to purchase the Kindle eBook at no charge.