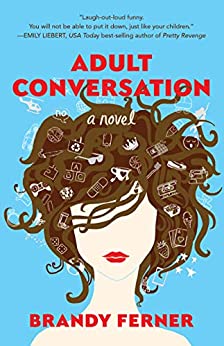 April is a thoughtful yet sarcastic mother of two who tries her best to be a caring, connected mom in a middle-class culture where motherhood has become relentless. April rages at modern motherhood’s impossible pressures, her husband’s “Dad privilege,” and her kids’ incessant snack requests. She wants to enjoy motherhood, but her idealist vision and lived experience are in constant conflict with one another. Is she broken—or is motherhood?

Desperate for an answer, she seeks out a therapist, and lands with an unexpected woman whose validation and wisdom gives April the clarity to reclaim herself and even start designing clothes—her pre-motherhood passion. But when the ever-elusive babysitter cancels last-minute, April finds herself back at square one. She seeks guidance, but her therapist is now dealing with her own crumbling marriage—and instead of counseling April, she convinces her to speed off to Las Vegas with her to help catch her husband cheating. With a little weed, alcohol, and topless pool hopping, plus a male stripper and some much-needed autonomy,

the two find lost pieces of themselves that motherhood swallowed up. But neither one is prepared for how tested—and tempted—they will be, or for the life-altering choices their journey will force them to make. Who is guiding whom anymore?