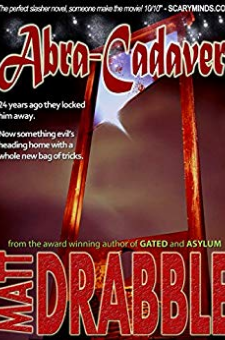 "Matt Drabble is a name that will one day be as widely recognized as Stephen King & Dean Koontz" - READERS FAVORITEThis Kindle version is completely FREE! Abra-Cadaver is a full length (327 pages) Horror/Thriller/Murder/Mystery. It is the 2017 Readers Favorite Silver Medal Winner for Horror Fiction.Winner of a prestigious Indie Book of the Day Award, a 2015 Kindle Book Review Award Finalist and is the 2016 Book Excellence Awards winner for Horror Fiction. Matt Drabble also has a highest Amazon Horror Author Ranking of 5th."The perfect slasher novel, someone make the movie! 10/10" - ScaryMinds.com "This will serve to excite and thrill gore fans" - The British Fantasy Society "in the tradition of such thrillers as Scream... a fast, fun piece of horror entertainment" - UK HORROR SCENE"A suspenseful, on the edge of your sit, thrill ride. A great read that will leave you sleeping with the light one!" - FaerieTaleBooks.org Tommy, Dixon, McEwen, PJ, and Alison were always a close knit group, childhood friends who stood strong against the world around them with the sort of unbreakable bond that only exists in the minds of children. That was until Tommy's 12th birthday party. Obsessed with magic tragedy strikes when an illusion goes horribly wrong and a young woman lays dead leaving families screaming in horror.A local magician Albert Trotter is railroaded during a rigged trial and locked away to soothe the fears of a shocked community. His crime was to marry the daughter of a local powerful man and use her as his assistant in his act. Forever protesting his innocence he is forced to pay the price to allow good minded residents to sleep easy. After a vicious assault in prison, he is eventually sent to a mental institution in a catatonic state and a town breathed easy as his name becomes local legend.Now Tommy is 36 and heading home for the first time in over two decades. Returning to settle his father's estate and hoping to slip in and out of town unnoticed, but he's not alone. Someone is slaughtering the residents of Denver Mills and holding those involved with the Trotter trial in a steely grip of fear.Tommy will have to find the strength to bring his old friends together in order to solve the mystery and survive. Secrets and lies are exposed throughout the small town of his childhood as fractured relationships are put to the most extreme of tests. All of those that he once called friends now carry their own dark baggage, baggage that has followed them into adulthood scarring them all deeply.Something evil is coming home, and they're bringing a whole new bag of tricks.You might also like to check out some other works of mine:DOUBLE VISIONS - "sometimes when you stare into the darkness, something stares back" (free kindle version available)THE GATED TRILOGY a UK & US Horror Chart Top 10 best seller, the 2015 Readers Favorite Gold Medal Winner for Horror Fiction & the 2014 Full Moon Awards Horror Book of the year.THE ASYLUM TRILOGY - an Amazon US Horror Chart #5 best seller, voted #5 on The Horror Novel Review's Top 10 Books of 2013 and is a 2014 Readers Favorite Gold Medal winner, a 2016 Readers Favorite Silver Medal winner for Anthology Fiction.you can find more information:Website: mattdrabble.co.ukTwitter: MattDrabble01Facebook: matt.drabble.3