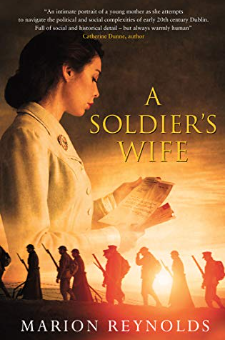 ‘An engaging read and an homage to the resilience and courage of those woman who kept the home fires burning during WW1’ Sunday IndependentEllen, romantic and naive, falls in love with James, an Irishman serving in the British Army. He is posted to India and this, for her, is a dream come true. After seven years of heartache and joy, and a lifestyle which is leisurely and luxurious, they return to Ireland and James is demobbed.They settle with their three young children in Dublin, a city rife with political and civil unrest, and beset with terrible poverty. When World War I is declared, James re-enlists. Ellen is left to bring up her children alone, in a city which views the wives of British soldiers with suspicion.If James survives and returns, it will be to a different Ireland, one which has lived through the 1916 Rising and its aftermath, where anti- British sentiment grows stronger every day.Ellen longs for James but worries. Will there be a place for them in this new Ireland?‘A novel full of what David Norris describes as ‘innate human sympathy’ an intense read’ Sunday Independent‘A wealth of pleasure is offered within these pages – a sterling debut that anticipates ever greater things to come’ Irish Examiner‘A vivid and often moving portrait of life at that time’ Irish World‘An epic tale of a wide spectrum. It brought Dublin of that period to life’ Muriel Bolger