A Murder in Mount Moriah 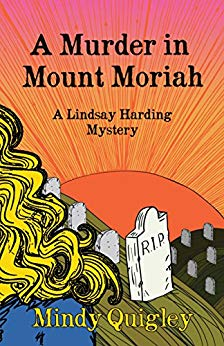 From award-winning mystery writer Mindy Quigley comes a hilarious tale of small town intrigue and big-time crimeFor hospital chaplain Lindsay Harding, facing death is part of the job. After all, she spends her working days comforting sick and dying patients. But when the annual Civil War reenactment in her hometown of Mount Moriah, North Carolina produces a real casualty, the Grim Reaper suddenly gets a little too close for comfort. With the clock ticking, the police struggle to unravel how and why a beloved local re-enactor was shot in front of hundreds of on-lookers. As fingers point and tempers flare, another victim ends up laid out on Lindsay's front porch. Lindsay's life is in danger, but her efforts to expose the century-old sins that lie at the heart of the mystery are undermined by her disastrous love life, her no-good mother, and a ninja-like squirrel--not to mention the small matter of a dangerous killer who'll stop at nothing to keep a sinister secret. Will courage, curiosity, and Lindsay's irreverent brand of religion be enough to catch the killer before she becomes the next victim?All the while Lindsay is torn between her attraction to the hospital's new doctor, an Adonis in surgical scrubs, and her fractious, flirtatious relationship with the (sort-of) married detective investigating the murder.When Lindsay threatens to expose century-old sins that shaped the very soul of Mount Moriah, the murderer gets too close for comfort and threatens Lindsay's chance at a happy ending.