A Lady’s Guide to Etiquette and Murder 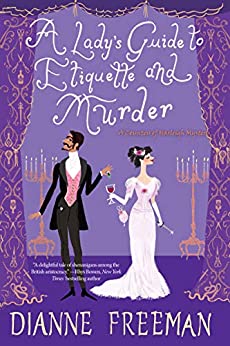 An American-born countess in Victorian London must navigate the social scene while solving her husband’s murder in this historical mystery.

Frances Wynn, the wealthy Countess of Harleigh, enjoys more freedom as a widow than she did as a wife. With her young daughter in tow, Frances rents a home in Belgravia and prepares to welcome her sister, Lily, arriving from New York—for her first London season.

But no sooner has Frances begun her new life than the Metropolitan police receive an anonymous letter implicating Frances in her husband’s death. Frances assures Inspector Delaney of her innocence, but she’s also keen to keep him from learning the scandalous circumstances of Reggie’s demise. As fate would have it, her dashing new neighbor, George Hazelton, is one of only two other people aware of the full story.

While busy with social engagements on Lily’s behalf, and worrying if Reggie really was murdered, Frances rallies her wits, a circle of gossips, and the ever-chivalrous Mr. Hazelton to uncover the truth. A killer is in their midst, and Frances must unmask the villain before Lily’s season—and their lives—come to a most unseemly end . . .

“This lighthearted debut tale of mystery, love, and a delightful sleuth will leave you wanting more.”—Kirkus Reviews“Dazzling…Fans of witty, lighthearted Victorian mysteries will be enthralled.”—Publishers Weekly (starred review)