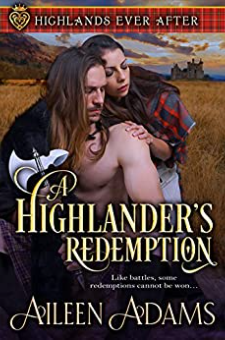 Like battles, some redemptions cannot be won...In early 1746, Alasdair Macintyre is headed home after the rout at Culloden on Drummossie Moor, in sight of Inverness. The battle has been lost and scar on his face that makes him so ferocious-looking that even children run from him in terror. He learns his father has betrothed him to a local lass—a nearly blind woman—in exchange for a sizeable dowry and a chunk of land. The woman brings with her a companion that hates him immediately. He has no interest in having a chain around his neck, not even in the form of a woman he once knew as a girl—a gangly, twig of a girl. But Beitris is no longer the girl Alasdair Macintyre remembers. She’s blossomed into a stunning woman, though one that is terrified of the scarred Highlander she’s betrothed to.