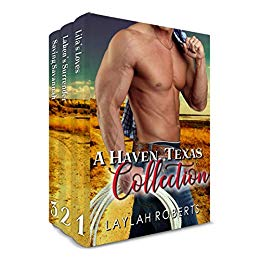 Come to Haven, Texas where the men are protective, dominant and sexy as sin...Lila's LovesFound in a damp, cold alley at the age of seven, Lila’s life was transformed when she met ClayRichards and his three adopted sons.Years later Lila leaves the home she loves, heartbroken, knowing her love for Gavin, Trace, and Colinwill never be reciprocated. They saw her as a little sister, not a woman. Certainly not their woman.Gavin, Trace, and Colin long ago decided there was only one woman for them. They made a bigmistake when they let her go, they won’t be making that mistake again.When they get some devastating news, the four of them are pulled back together. And no one, not agreedy mother or a crazy stalker will come between them again.Laken's SurrenderA feisty woman with a traumatized past. A Dom determined to win her back. And a murdererseeking to cure his victims of their sins.Laken has always loved Duncan Jones. But their relationship disintegrated years ago, and she's adifferent woman now. There’s no going back, no matter how attracted she might be to thegorgeous deputy sheriff.Duncan is determined to break through barriers Laken has erected between them and win her back.He knows he made mistakes in the past, they both did. But she was his once, and she'll be his again.But Laken’s secrets threaten not only their relationship but her very life.Saving SavannahAfter suffering a traumatic experience, Savannah shuts herself off from everything. Her husbands, her friends, the world. Once bubbly and full of life, she’s now scared.Max and Logan don’t know how to help their wife. They know she’s hiding something and they’ll do whatever they have to in order to find out what.Can two cowboys help the one woman who means everything to them or will she be lost to them forever?