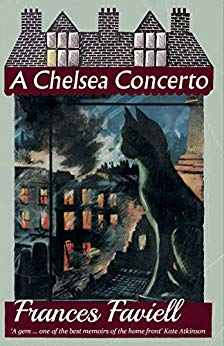 ‘Take off your coat,’ said the doctor. I took it off. ‘And your dress,’ he said. ‘It’s too dangerous – the folds may catch in the debris and bring the whole thing down.’ I took off the dress. ‘Fine,’ he said shortly. ‘It’ll have to be head first. We’ll hold your thighs. Go down and see if it’s possible to give an injection. Can you grip the torch with your teeth?’Frances Faviell lived in Chelsea before and during the London Blitz, having became a Red Cross volunteer when World War II began. Chelsea was particularly heavily bombed and the author was often in the heart of the action, witnessing or involved in fascinating and horrific events through 1940 and 1941. Her memoir evokes an unforgettable cast, Londoners and refugees alike, caught up together in extraordinary and dangerous times – not forgetting the ‘Green Cat’, a Chinese statuette, standing on the author’s window sill as the home’s talismanic protector.Frances Faviell’s memoir is powerful in its blend of humour, tenderness and horror, including the most haunting ending of any wartime memoir. A Chelsea Concerto is reprinted now for the first time since 1959, with a new introduction by Virginia Nicholson.‘Irresistible reading. There could be no more graphic account of what one first-aid worker and her small party witnessed and did during the London Blitz … while characters are sketched in with a novelist’s art, the impression left is one of stark truth.’ Birmingham Post‘I am so happy that A Chelsea Concerto is back in print. It is a gem of a book, one of the best personal memoirs of WW2 on the home front, written with an artist’s eye for detail and immediacy.’ Kate Atkinson